Sparks of Revival: The First Great Awakening in America

Sparks of Revival: In the Marketplace with Kyle Williamson

Monumental Truth – by Tom Phillips – The Foundation of America 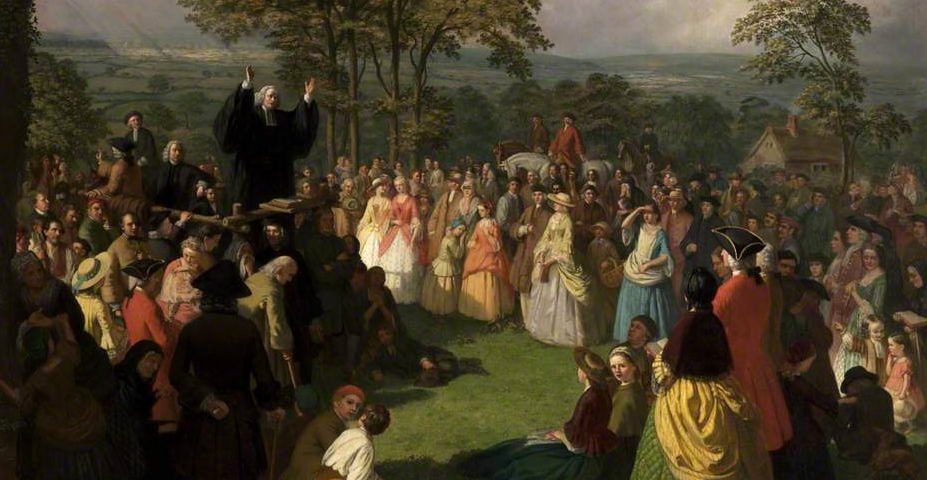 You don’t have to listen too hard to make out the cries of harried Americans today. Pressed by too many demands, too little time, mushrooming pressures, and shrinking paychecks, people are quick to confess, “I’m just trying to survive.” That’s exactly what Americans were saying in the days that led to our nation’s first Great Awakening. Forced with building a society from scratch, the early settlers defined the word “pressure.” Pressure didn’t come from daily freeway commutes or seventy-hour workweeks but from fighting medical emergencies without the ability to dial 911 and winters without cozy, insulated homes. Crops failed, diseases spread, and early deaths were common.

Thanks to the Halfway Covenant, a person could belong to a church without believing in Jesus Christ for salvation. The Halfway Covenant allowed unbelieving children of believing parents to receive baptism; they simply weren’t allowed to receive the Lord’s Supper or vote on church matters. Thus was faith reduced to a formality. People lived with growing irreverence, succumbed to rampant dishonesty, and grew reluctant to acknowledge the word “sin.”

Into such a dismal cultural climate, a spiritual outbreak occurred which no one could have predicted—the Great Awakening. On one Sunday, Theodore J. Frelinghuysen, a twenty-nine-year-old pietist, preached what few wanted to admit: Human beings were depraved and needed a personal encounter with God and a change of heart. But it was Jonathan Edwards’ preaching that reverberated in the hearts and minds of his hearers. When he asked his congregation, “How many kinds of wickedness are there?,” he didn’t wait for a response. He simply described what he saw all around him—irreverence in God’s house, disregard of the Sabbath, neglect of family prayer, disobedience to parents, quarreling, greediness, sensuality, and hatred of one’s neighbor.

The effect of Edwards’ sermon set New England ablaze. Men and women wept tears of deep remorse. They knew they needed to be forgiven. They came to God on their knees, and out of their deep sorrow and repentance, they received an unexpected feeling of cleansing and joy. What was dead came to life.

Spiritual night was nailed beneath the floor of spiritual dawn. The new fervor spread to a hundred communities. Nearly 300 people—25 percent of 1,100 individuals in his town alone—were then converted. The Great Awakening witnessed an immediate, overt transformation in men and women throughout New England. People felt deep conviction when they realized they had turned their backs on God. Guilt led to confession, confession led to forgiveness, and forgiveness led to new devotion to a Lord and Savior thousands had never known.

By 1735, the Great Awakening began to cool. It might have ended altogether had it not been for George Whitefield. If Edwards was the spark of revival, Whitefield became the flame that forced the movement to spread. In thirty-two years in the mid-1700s, this Englishman made seven trips to America to preach. His style was dramatic and pointed. “I love those who thunder out the word,” he said. “The Christian world is in a dead sleep. Nothing but a loud voice can awaken them out of it.”

By 1760, few were still asleep. During the Great Awakening, an estimated 25,000 to 50,000 people became believers. One hundred and fifty new Congregational churches were founded. Separatists, Baptists, and Presbyterian churches multiplied—over 10 percent of New England’s total population of no more than 340,000. That equates to approximately 30 million citizens today.

By the time the flame of the Great Awakening began to die out for good in 1760, thousands of people who once had turned their back on God had changed their way of living. From New England to the colony of Jamestown, where the people’s indifference to the Bible had been strong, conversions to Christ were so remarkable it was agreed that only God could have brought about such a sweeping transformation.

Find this excerpt and more from Tom Phillips in Jesus Now Awakening (2016) pages 67-70.

The Person of Truth in America – Audio Snippet from Tom